The Miser writes this from southern California, where it’s 70 degrees and sunny with zero percent chance or rain or snow for the whole week.

Leaving behind the Midwestern winter wonderland frozen tundra is good for a Miser’s soul.

A lot of people, I’ve found, keep strict budgets at home only to throw them out the window and break the bank on vacation.

The challenge is sticking to a game plan while you’re traveling and finding deals before you go. The easiest way to do that second part is by traveling in the shoulder season — the times right before and after peak season — when everything’s less expensive.

Having settled on the destinations, it was time to decide when to go.

We were going to drive to the Pictured Rocks National Lakeshore. I’d heard so much about it, so this was definitely a bucket list trip.

Gas prices weren’t a big factor, but accommodations would be. The top-rated hotel in Munising had rooms for $120 a night in early June.

The rates more than doubled to $253 a night by July. And the rates stayed that high all the way through September as fall foliage season began.

That meant the options for a two-night stay were $240 plus tax or $506 plus tax. When you think of all the extra things you can do with that $266, the choice was pretty simple.

It was an amazing trip. We got to see all the top sights — Miner’s Castle, the Pictured Rocks, 60-foot waterfalls buried deep in the woods and only accessible by hiking to them.

Another advantage that I hadn’t thought of when booking the trip was how few tourists there’d be in shoulder season. There were a lot of couples on weekend trips like us. Since school was still in session, there were hardly any families with kids.

It allowed us to fully appreciate the natural beauty with other people who also just wanted a quiet hike through the woods. It was a wonderful two-and-a-half days spent away from the city hustle.

And it was almost enough to make The Miser’s Girlfriend forget about Minneapolis.

This year, we decided to go back to California for our winter getaway. 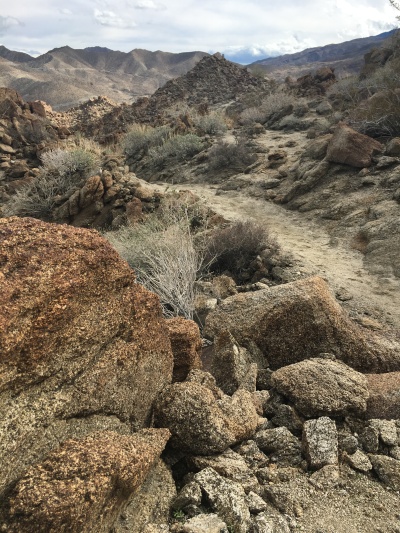 The Miser began by studying airline prices from Chicago to the area’s many airports. No fan of layovers, he wanted a direct flight. And not wanting to drive to and from LAX (that sounded like the opposite of a relaxing vacation), he wanted that direct flight to go to the smaller airport closer to the destination.

Luckily, there’s an option for that: one daily nonstop flight.

In January, those flights were $360 round-trip. In March, the round-trip cost spiked to a stunning $600.

$600! You could almost afford to take two January trips for that March price, The Miser thought.

(I should point out, we’re staying with family on this trip. Not only does this eliminate the need to compare hotel prices, it makes the trip a lot easier on the budget.)

This being my third time here in January, it’s obvious this isn’t high tourism season — no families on their Christmas or spring breaks. The restaurants are not crowded, golf courses aren’t too busy, and nearby Joshua Tree National Park is wide open.

I’ll let you know if get tired of looking at mountains and palm trees.

There are a couple downsides to traveling in shoulder season.

–The weather: In peak season, you’ve got the best odds of having ideal weather. In off season, the worst odds. In shoulder season, you’ll get a mixed bag of mostly nice days and some less-ideal ones.

When we went to the Upper Peninsula last June, it rained but then got sunny the first day with temperatures around 60. The second day, it was 60 and sunny. The third day, it was 70 with strong wind.

Was the rain a downer? Sure. But by looking at the forecast before the trip, we decided that would be the day for any indoor activities.

–Things to do: Resorts and towns plan their annual festivals around the tourism schedule. With more tourists in peak season, that’s when most of the events are held.

If you’re taking a trip for more than just the festivals, this is no problem. You’ve still got scenic beauty, recreation, beaches, entertainment options, etc. Those things that are open will definitely have shorter lines/fewer crowds.

Paying full price during peak season can definitely lead to a busted travel budget. Maybe even some hand-wringing over the credit card balance when you get home.

When you’re saving 30-50 percent on the biggest costs associated with your trip — airline tickets and/or hotel accommodations — it’s a lot easier to afford a vacation or two every year.

Couple that with smart decisions while you’re on the trip (looking for discounted tickets to attractions, limiting yourself to one fancy restaurant meal, making your own breakfast or finding a hotel that has free breakfast), and you’ll be traveling in style.